A truck unloads corn grain at a processing factory in Ukraine. © FAO/Genya Savilov

A new report from UN trade and development body UNCTAD published on Thursday shows how the UN-led Black Sea Grain Initiative has provided hope for millions impacted by rising prices and reduced supplies of staple foodstuffs from war-torn Ukraine.

And with the deadline looming, it also underlines why it’s critical to renew the initiative next month, said UNCTAD.

Thanks to the initiative agreed in July by Ukraine, Russia and Türkiye, and led by UN chief António Guterres, port activity in Ukraine is picking up, and large shipments of grain are reaching world markets. The deal also involves increasing the flow of crucial fertilizers from Russia.

Reaching tables of the needy

As of 19 October, the total tonnage of grain and other foodstuffs exported through the initiative had reached almost 8 million metric tons.

“The UN-led Initiative has helped to stabilize and subsequently lower global food prices and move precious grain from one of the world’s breadbaskets to the tables of those in need,” the report says.

The Food Price Index published by the UN Food and Agriculture Organization (FAO) shows prices of global food staples have declined in recent months – by about 8.6 per cent in July, nearly two per cent in August and 1.1 per cent in September.

But with the initiative ending in November and its renewal uncertain, the prices of some commodities, such as wheat and maize, are rising again, the report warns.

Without the initiative, there is little hope for providing food security, especially in developing and least developed countries, UNCTAD states. 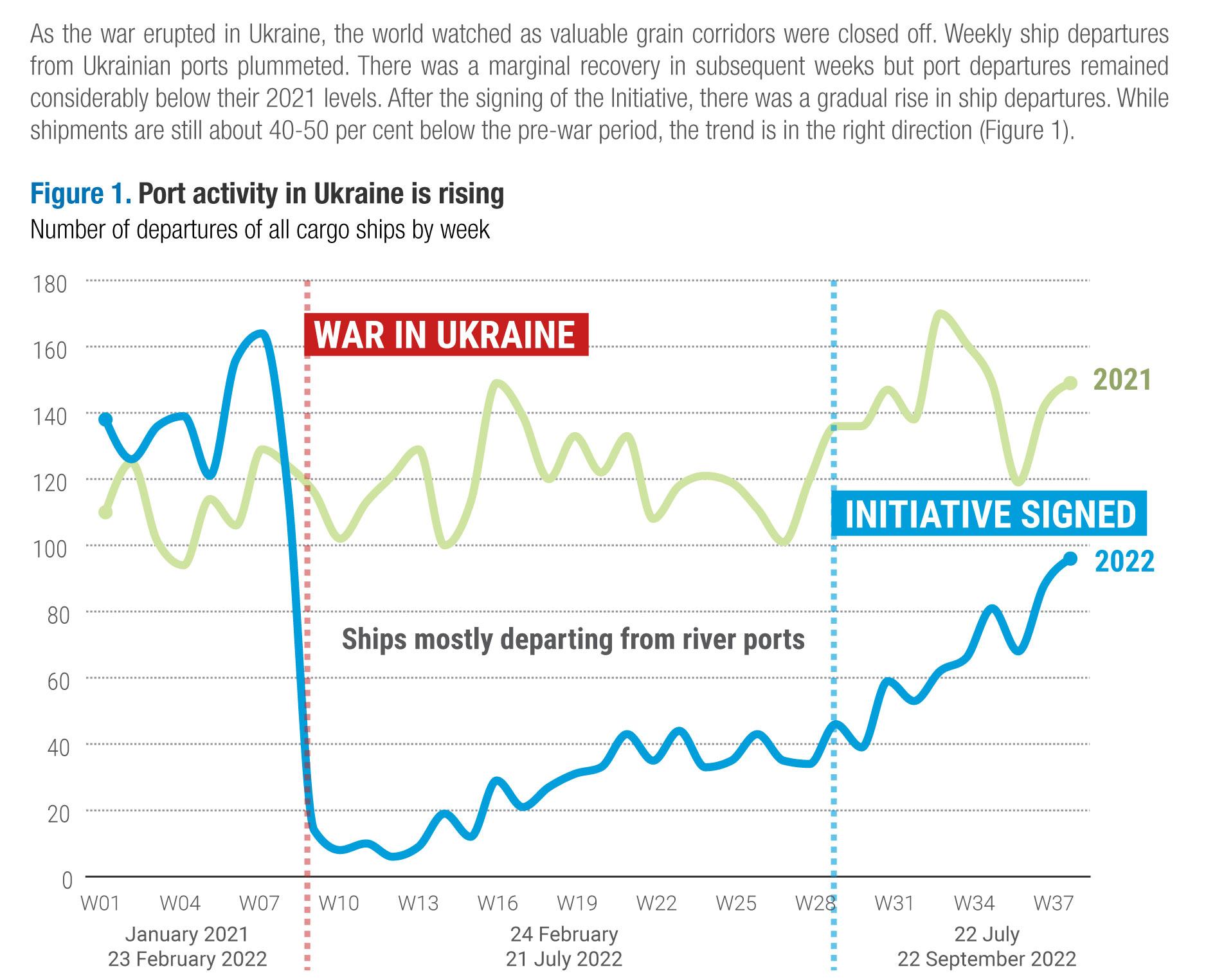 Source: UNCTAD secretariat, based on data provided by Sea/ (www.sea.live) and the Joint Coordination Centre.

The initiative reopened the grain gates of Ukraine to the world, and particularly to developing countries.

Maize and wheat account for more than 70 per cent of the nearly eight million tons of grain that have left Ukrainian ports so far.

Nearly 20 per cent of the wheat exports have gone to least developed countries (LDCs) with vulnerable populations.

The initiative doubled the amount of wheat shipped to LDCs between August and September – about half a million tons.

But wheat exports to LDCs between January and September this year, totalled less than 1 million tons. This implies an export gap of 1.2 million tons with respect to 2021. More needs to be done to match previous levels of exports. 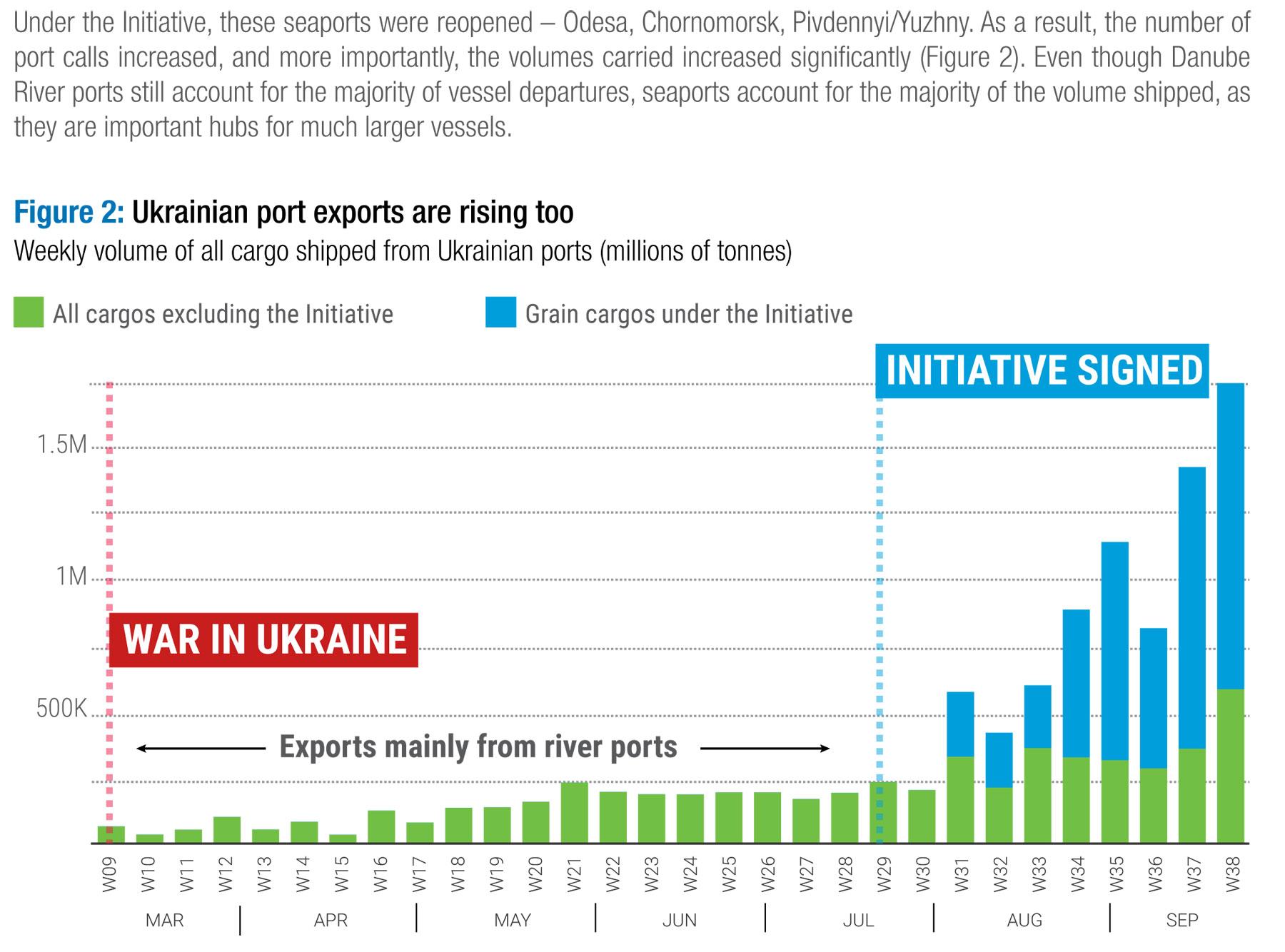 Source: UNCTAD secretariat, based on data provided by Sea/ (www.sea.live) and the Joint Coordination Centre.

The initiative has helped to make grain more available and eased pressure on food prices. This has in turn helped to improve global access to food, particularly for the poorest and most vulnerable, the report indicates.

The prospect of the initiative and the reopening of the Black Sea ports helped to push down historically high market prices.

But prices are rising again: “In a context where trade is very uncertain, signals matter very much,” UNCTAD Secretary-General Rebeca Grynspan said. “When there is no clarity, no one knows what is going to happen, and speculation and hoarding take over.”

Wheat and maize prices are still at historically high levels. This weighs on the affordability of basic foods and poses a risk to food security globally.

This is one more reason why the renewal of the UN-led initiative is important for developing countries.

The report was produced with contributions from the Joint Coordination Centre for the Black Sea Grain Initiative, comprised of senior representatives from Ukraine, the Russian Federation, Türkiye and the UN, which ensures the safe maritime transportation of grain and other foodstuffs from the three key Ukrainian ports in the Black Sea to the rest of the world.